This article is Part 3 in a 7-Part Series.

In last post, I introduced the runtime challenges in MSA, and listed three typical reference modes to resolve communicationconcerns. This post will provide a hands-on architecture PoC(proof-of-concept) sample that introduce the embedded router mode by practice. The sample is aimed to demonstrate how to build and run a microservices architecture(MSA) application with excellent technologies offering by Spring-Cloud, Hashicorp, Elastic, Netflix and etc.

All of the sample source code is hosted on repsoitry, it is automated, and easy to run. Indeed, the sample content is far beyond the MSA, besides the MSA-related features, like service discovery, load balance, api-gateway, circuit breakers, distribiuted tracing , aggregated logging(implemented by the sidecar mechanism by Nomad), I also add more features which we usually be used by application in Java and/or Spring-Cloud, including define a customzied annotation based AOP feature, Event-Driven via kafka(transactional message), flamegraph perf for performance analysis in Java, both IBM and Oracle JDK heap analysis and coredump analysis, etc. 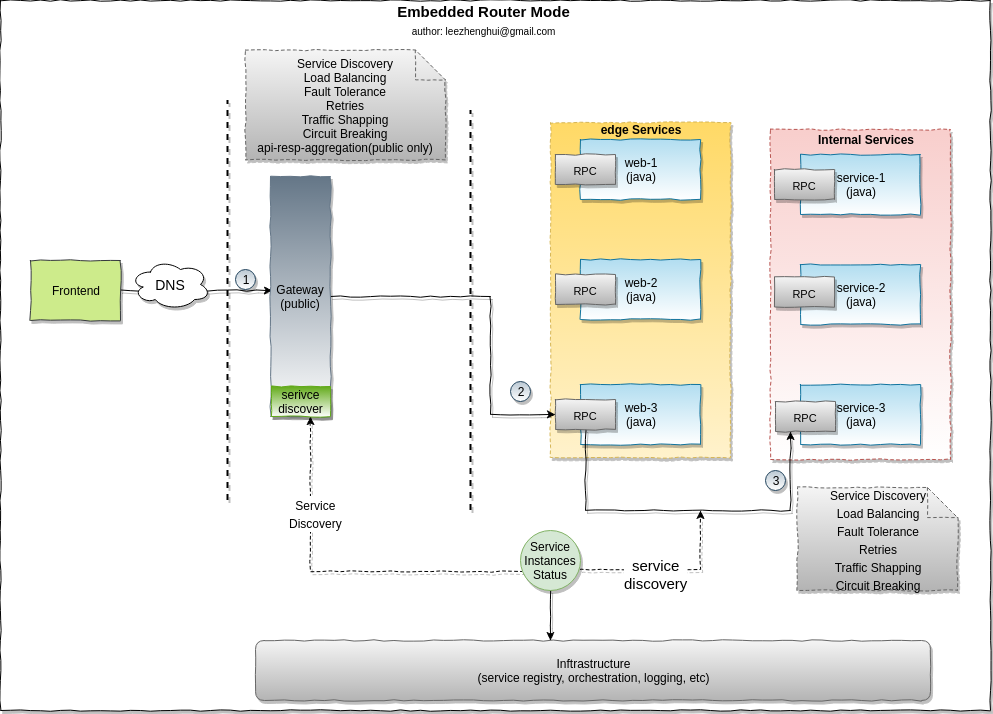 Please refer to my early post reference-modes-for-msa-service-communication for more details about the MSA runtime challenges.

Landscape of Spring-Cloud in MSA

In order to keep the PoC sample as simple as possible, I am using a simple script to simulate CI/CD features here.

The proxy is a well-used design pattern. We can see it in either high level software architecture design, e.g: api-gateway and service mesh in microservices, or a narrow-down specific programming module. Generally speaking, the proxy pattern provides the capablity to implement a contract interface, but adds special functionality on-the-fly behind the sense.

Aspect Oriented Programming(AOP) addresses the problem of cross-cutting concerns. It is a complement to Object-Oriented-Programming(OOP). Not like OOP, which provide class as an key unit of modularity, AOP focus on aspect as it's unit of modularity, the aspect extract and modularization the code which cut across multiple classes/components for the same concern solution in a system. Such concerns are often termed cross-cutting concerns in AOP literature. In a real-life system, the typical cross-cutting concerns includes logging, security, transaction management, caching, validation, etc. Providing AOP capability is important to increase modularity, and normally be a fundamental feature in a middleware platform.

AOP is really popular in java. In a JEE runtime, the transaction, security are noramlly provided as AOP aspects under the hood. In SOA, the SCA runtime also heavily depends on the AOP to provide QoS, IT-Specific features around the business logic. In Spring, the AOP is actually delivered as a base component in fundamental layer and open to upper stack. Indeed, per my experiences on JEE server development, AOP provides an excellent solution for the problems in enterprise application field to increase modularity and make the system more loose-coupled, especially in the middleware product development.

Implementing an AOP framework to advise method execution, the proxy pattern is perfect fit here. The aspect module code can be abstracted, prepared and injected at before and after points of the method and also be able to recieve the execution context, arguments and output(or fault) to the target operation like it was there. That is reason we usually see the proxy pattern in an AOP framework. In a pure java world, some typical approaches to achieve this:

In a pure java world, using dynamical proxy way for AOP implementation, it usually be used in conjunction with a IoC container, which can take over the responsibility of proxy instance construction and injection. Hide these implementation details and provide a clean/easy-to-use programming model to developer.

Microservices should be event-driven

Event-driven is a very important approach to decopule the data model among servcies and keep data consistency in a eventaully consistency fashion. I also demonstrate it in this sample via Kafka transactional message. This demon feature is delivered by a customzied annotation based AOP interceptor, you can find both simple AOP-Framework and the interceptor in "modules/ifw.lib" 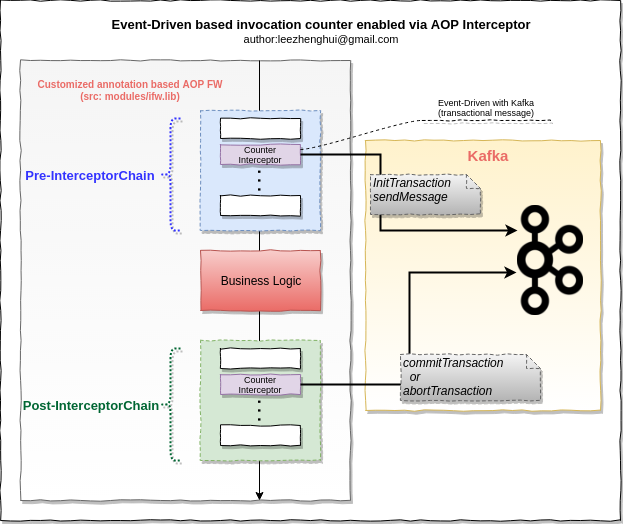 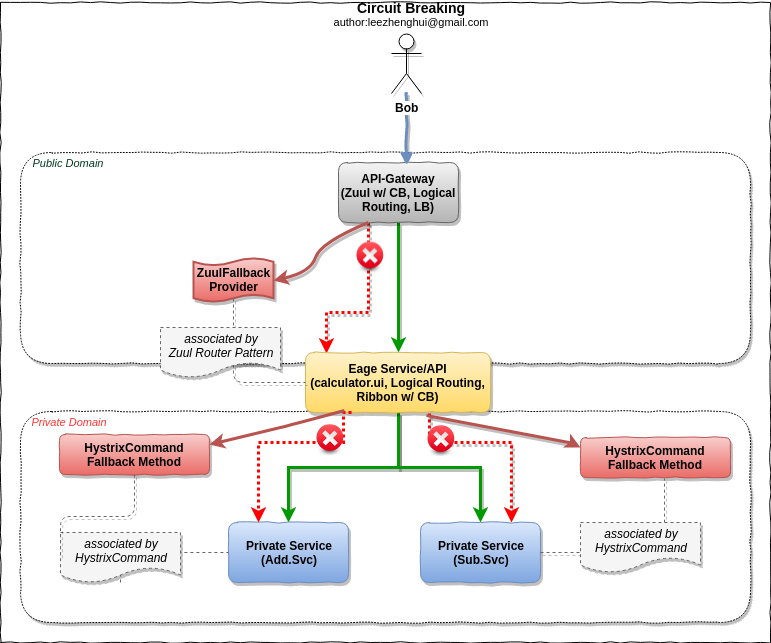 Please refer to Hystrix for more details about how Hystrix works.

Microservices architecture faces certain challenges that are not common for monolithic systems – one of them is traceability of end-to-end transaction that is executed in distributed environment and that can potentially involve invocation of large number of diverse applications and services. In case of performance degradation or fatal exception thrown that is experienced in end-to-end solution, identication of bottleneck component/failure point become more and more diffcult. Distributed tracking is used to resolve the problems in this area.

opentracing-spring-cloud contains auto-configurations which can be enabled to instruments and trace following Spring Boot projects:

Components Architecture (includes both span generator side and consumer side)

Below is the description from zipkin architecture doc

Here's an example sequence of http tracing where user code calls the resource /foo. This results in a single span, sent asynchronously to Zipkin after user code receives the http response.

In Spring-Cloud, the RESTful API actually play the key role in the ecosystem. Why/How do we document our RESTful API?

The most important design principle for RESTful Services is Think about consumer of the API, Not like SOAP-Based Web service, REST does not provide a spec or a contract like WSDL in SOAP. Indeed, REST gives you the flexibility to choose proper documentation format and approach. But that does not mean “No documentation”. We do need to document our API.

There are multiple approaches to documenting your RESTful API

Swagger appears in the last couple of years and is now the most popular REST API documentation standard. We will use it in our sample for APIDoc generation

To generate swagger document, springfox currently provides a popular solution in spring-boot. We just need to introduce the dependence to springfox-swagger2, configure the Docket, using the appropriate annotations on the API router, method and models, then the swagger document will be generated automatically. Access it via:

If we want a visual UI and execute the API with test request, just add a dependence to springfox-swagger-ui. and open below link in browser:

Use nmon to collect the basic system profiling data. When do the benchmark testing, run the nmon command in background for overall system profiling, below is an example of visualized performance analysis result(charts in spreadsheet) translated from nmon profiling data: hello-springcloud_180918_0439.nmon.xlsx

FlameGraph with Perf_Event (Linux only)

To enable signal-based Java Heap dumps, the IBM_HEAPDUMP=TRUE environmental variable or the appropriate JAVA_DUMP_OPTS must be set. e.g: 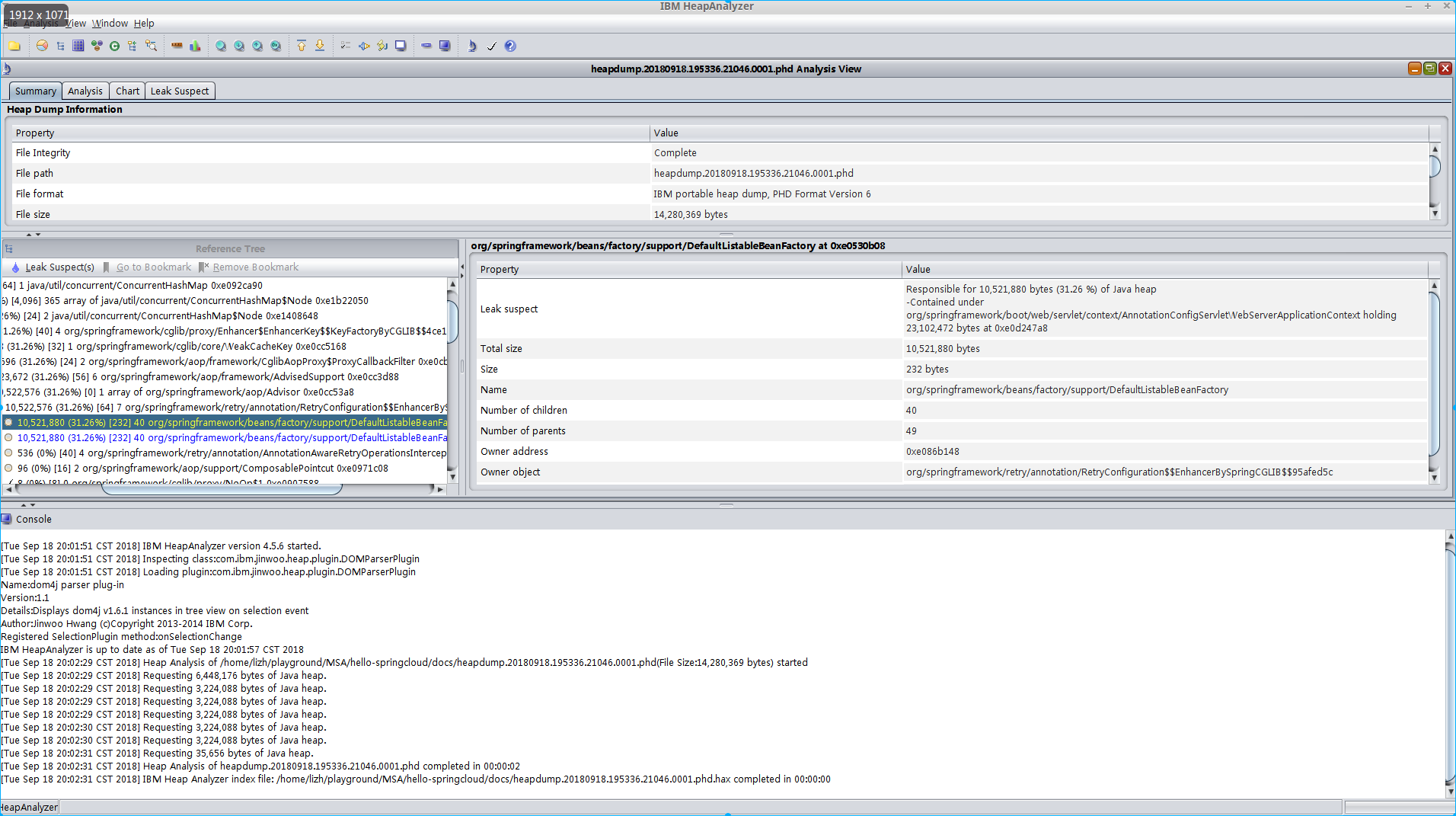 JVM log will point you to the location of javacore dump 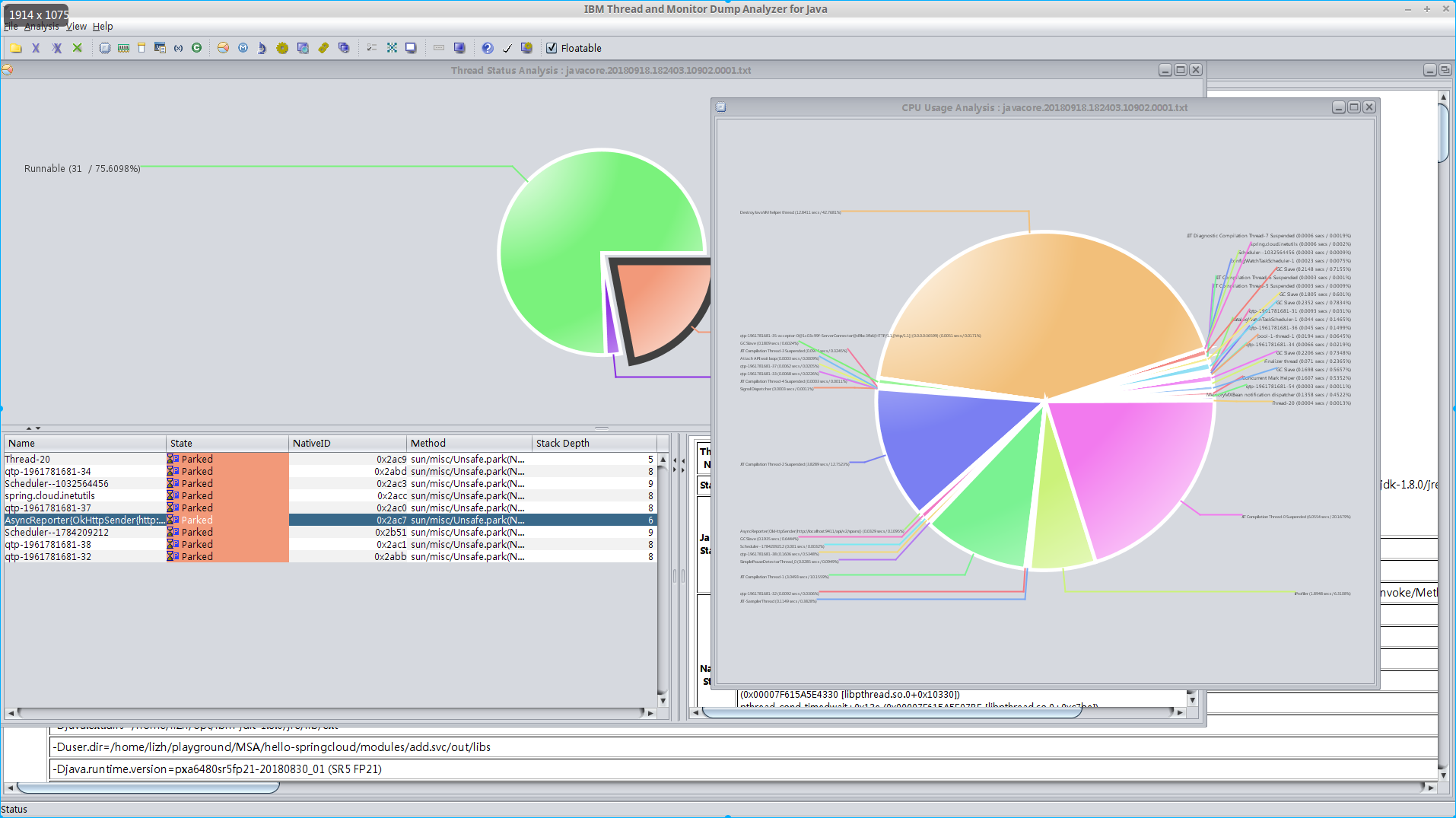 In this sample, the api-gateway distributed tracing will be reported to Kafka topic zipkin, we can monitor that topic and verify the result:

Either start Zipkin by Zipkin binary

or lanuch the Zipkin server via an embedded spring boot module

Run the sample via Command Line

Run the sample in ops mode(simulate the work with orchestrator)

To keep the sample simple, I didn't introduce a real CI dependence(e.g: usually gitlab, jenkins, etc) here. Just create a gradle deploy task to pack the deployables to a folder named dist. Later, when the VM provisioned, the nginx will start up and provide a http pkgs server on that folder.

The sample is using [vagrant](https://www.vagrantup.com/docs/installation/) to manage the VM. Make sure you have vagrant installed on your host.

Install&Startup all of runtime dependences

All of runtime dependences, including common dependences, elasticsearch, filebeat, hashi-ui, JAVA-v8, kafka, kibana, logstash, nginx, nomad, wrk and zookeeper are managed via ansible, which will be initialized during VM provision. 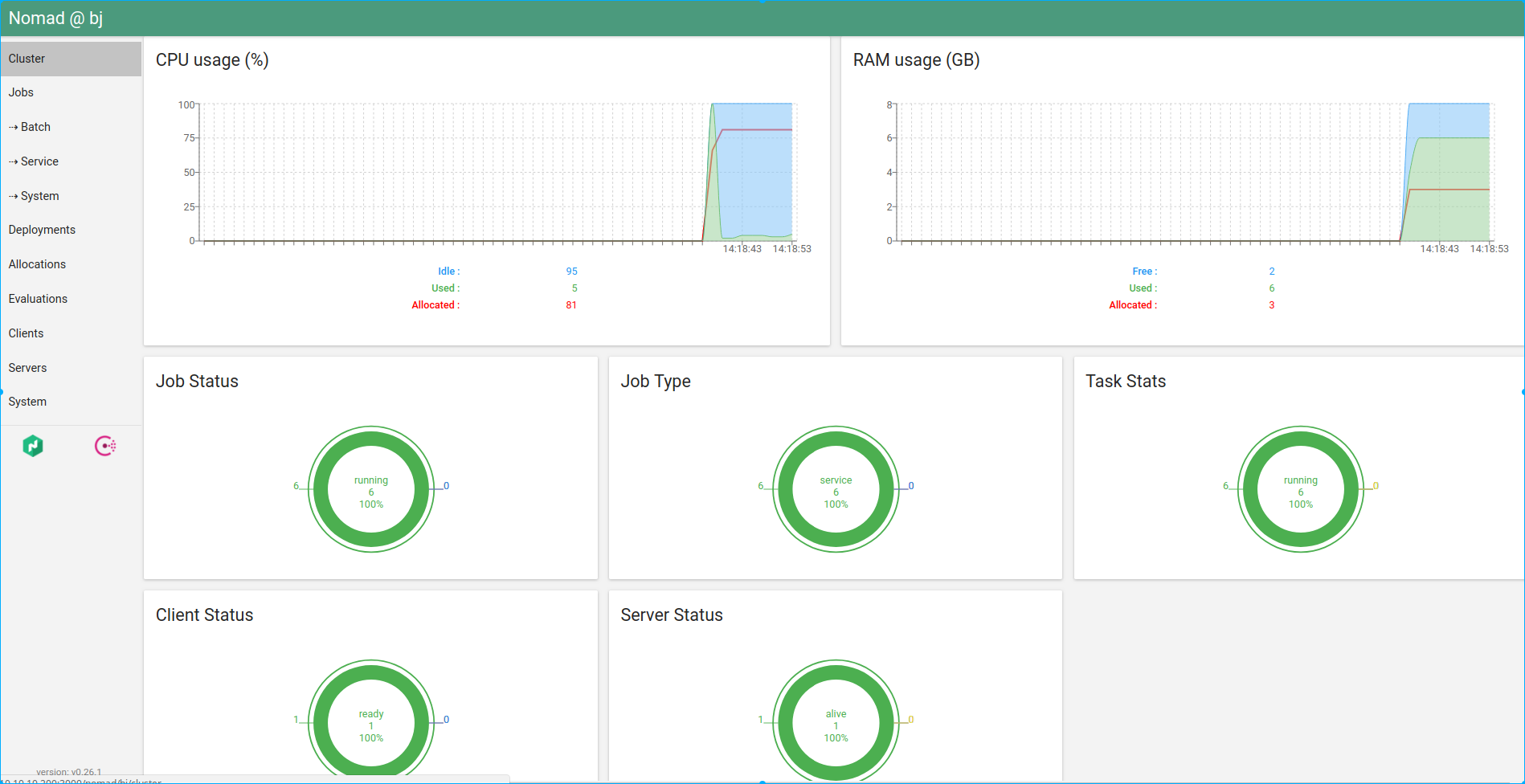 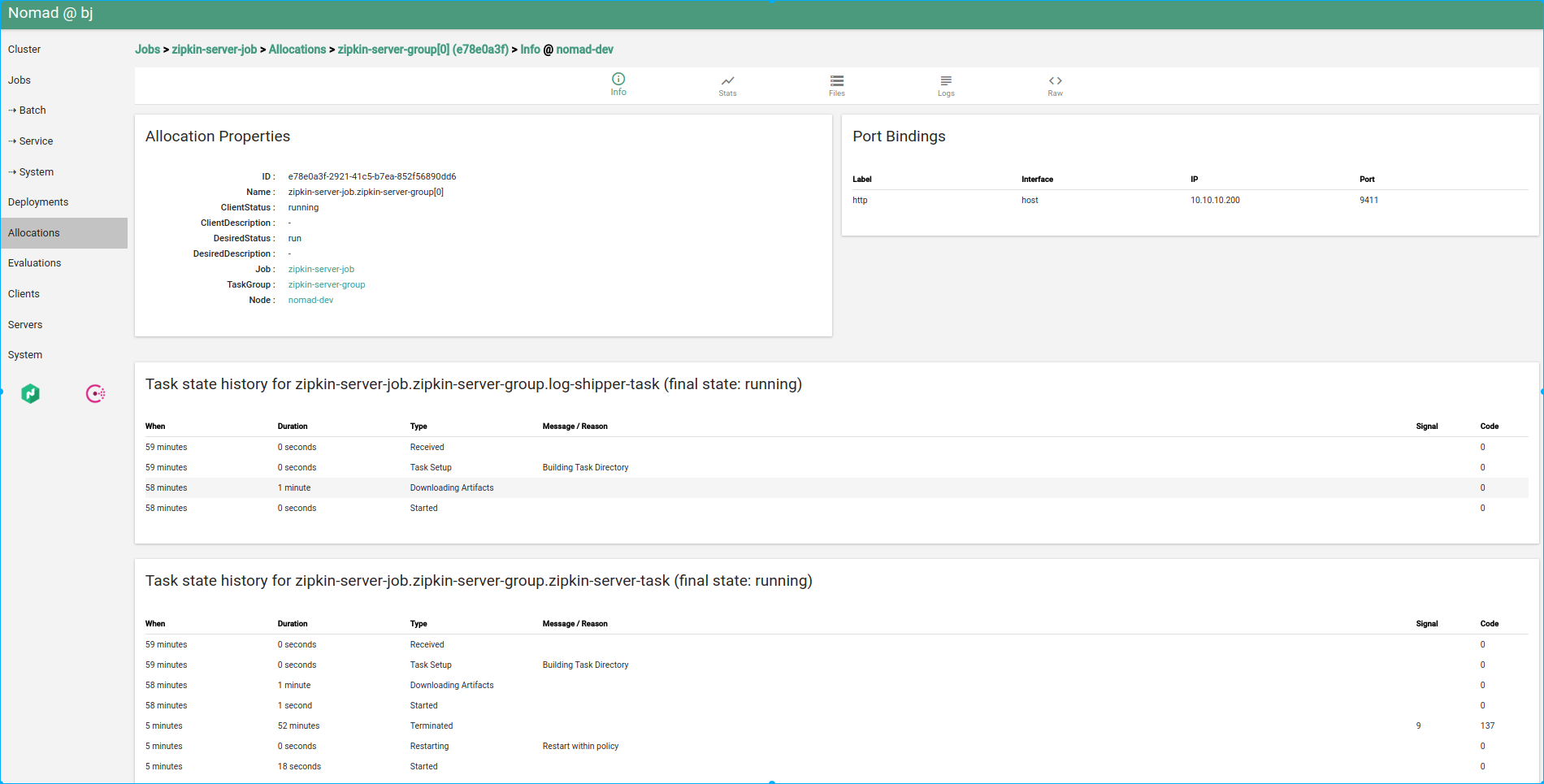 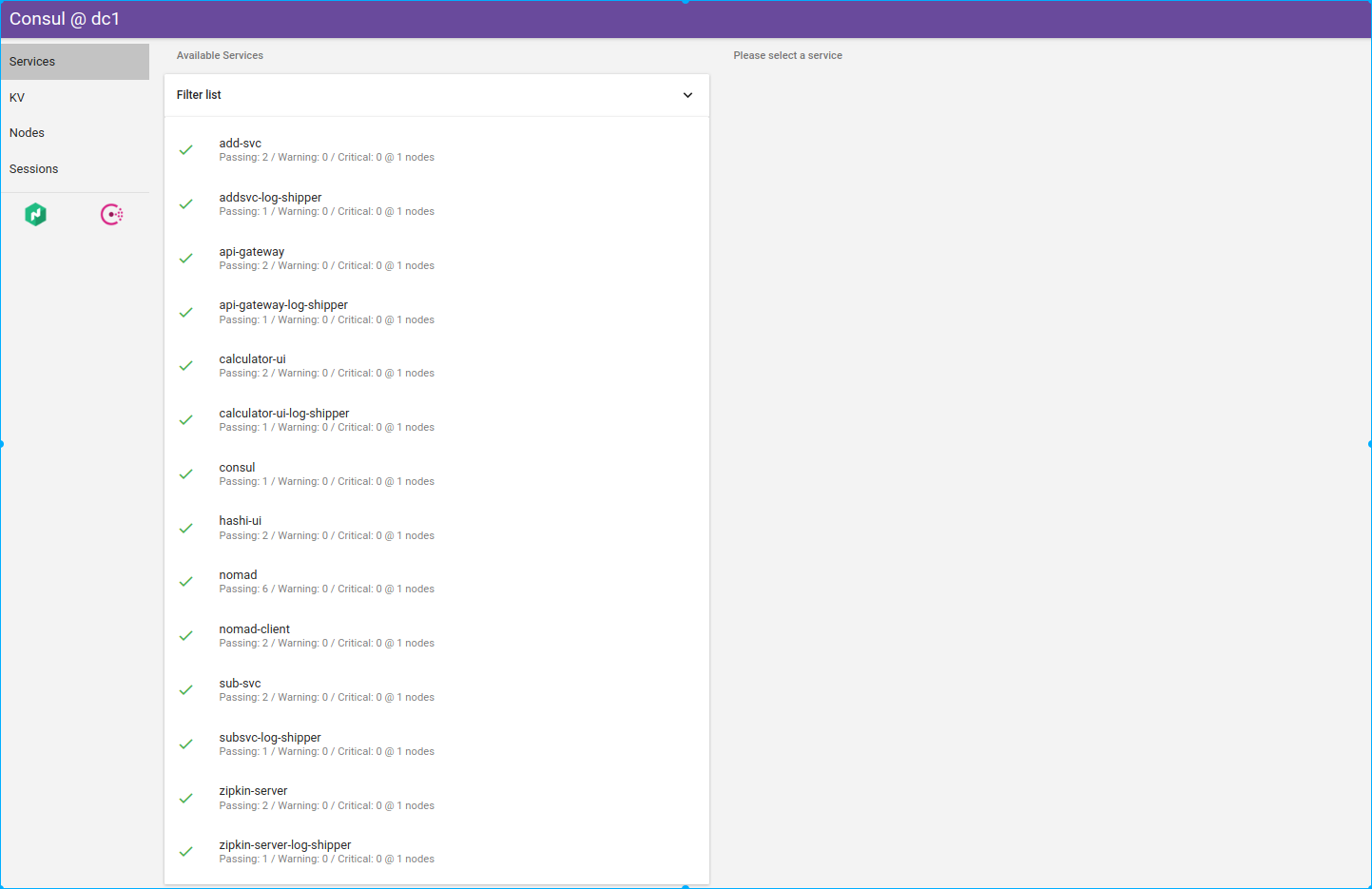 If the sample run successfully, you will see output in stdout as below:

In this sample, only apigateway's distributed tracing is reported to kafka. Other services will report trace via HTTP protocol

run the sample, you will see the message like below:

In this sample, only apigateway's aggregated logging is shipped to kafka. Other services will shipped to filebeat's stdout.

run the sample, you will see the message like below:

The nmon command running in background to do the sampling, the overall system performance analysis result is hello-springcloud_180918_0439.nmon.xlsx

In this post, we introduce the embedded router mode via spring-cloud based PoC sample, in next post, we will take a hands-on practice on gateway mode for a mixed programming language scenario.

This article is Part 3 in a 7-Part Series.